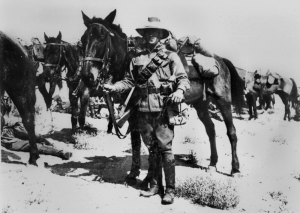 Image courtesy of the State Library of QLD

ANZAC Day is on Thursday, where hundreds of thousands of people will turn out and commemorate all the men and women who served in the first World War.  We would also like to take a minute to recognise the brave horses who carried the soldiers on to the battleground. Often going without food or water for many hours, carrying soldiers with a lot of equipment, these horses also gave their lives to serve.

The main breed of horse used by Australians overseas were known as Walers. They were called this as most came from New South Wales but were in fact mixed breeds from all over Australia.  A few of the main influences on the breed include Thoroughbreds, Timor pony, Arab and Cape horses. Despite their similarities to the Australian Brumby, it is unlikely the Waler breed had much of their bloodlines in their lineage, particularly in the later stages. The vast majority are bay in colour, and around 15-16hh. These horses were used for their hardiness and temperament and are still bred today. For more information on these horses, we have included a link to the Australian War Memorial site here.

An article by the ABC from 2014 on the Waler horse here gives more insight into this breed of horse, which did not officially have a registered association until 1986. The people who breed them today say they have particular qualities to pass on and are a good choice for many disciplines due to their quiet, calm temperament and stamina for work.

We hope you all had a fantastic Easter break, and stay tuned for our new winter stock and sales coming in the very near future! Why not give our Facebook page a like and then you’ll be notified of any great bargains we have coming up!